ALL AREA Game followed up by the ALL NIC-10 Game.  Tentatively Scheduled March 20th, 2021

Invitations will be sent out prior the senior showcase game.

Invited but unable to play

Invited but Unable to play

Tickets are will be available to purchase Monday March 18th, 2019

(Note:  Online tickets will not be available)

Practice Times for both All Area Game and Nic-10 Game

– 🎥🎥🎥 Each game will be filmed and shared on YouTube

Who was eligible to Participate? Who is selected to Play?

High School Seniors who have exhausted their IHSA eligibility are allowed to play.  Players are selected by Rockford Elite Basketball and Illinois Stars coaching staff, writers and recruiters from Rockford and Northern Illinois areas.  Emphasis for selections will be based on players from the NIC-10 conference and the BIG Northern Conference looking to pursue basketball in college.  Players from Select Schools within the Big 12, Fox Valley, Kishwaukee River and the Northwest Upstate Illini conferences will also be considered.

Note:  Underclassman with IHSA eligibility remaining are NOT allowed to participate per IHSA rules.  This event is permissible per IHSA rules and Rockford Elite Basketball has received permission to run the event via the IHSA.

Rod Wilmont coaches clinic is available to all boys and girls coaches. There is no cost for the clinic with the purchase of Senior Showcase Game ticket.

Basketball coaches are invited to come early and listen to Goshen Basketball assistant coach Rod Wilmont will host a coaches clinic prior to the All Area and NIC-10 game.  More details to follow 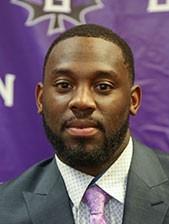 Rod Wilmont joins the Maple Leaf coaching staff for his first season in 2018-19.

He comes to Goshen from Manchester University, where he was an assistant coach in 2017-18, and Lakewood Park Christian High School, where he was the head coach in 2016-17 and led the Panthers to their first-ever sectional title. He also spent three seasons coaching the Fort Wayne Flight, winning three championships in the semi-pro Central Basketball Association, and was on the staff of the Fort Wayne Mad Ants from 2013-15.  Rod Wilmont also has 1 NBA G-League Championship.

A native of Miramar, Florida, Wilmont holds a degree in criminal justice from Indiana University. He played collegiately for the Hoosiers from 2002-07, earning two spots on the Big Ten’s all-defensive team and a third-team all-conference selection. He played nine years of professional basketball in Europe and in the NBA Development League, including time on the roster of the Milwaukee Bucks and New York Knicks.

Coach Wilmont’s basketball mentors are many and include the following.

Where will the game be played?

When will the Game take place?

Players from small schools and big schools will be invited to participate and will be by invitation only.   We look forward to a great event and anticipate selling out so get your tickets early.